Water refill stations at Disneyland plus a secret COLD one

Don’t forget to stay hydrated! There are several water refill stations in Disneyland including a cold filtered water option I’ll tell you about below.  You can bring your own water bottle to refill throughout the day at both parks.  There are drinking fountains all over the parks as well. Further down in this post I will list all the water bottle refill stations. First let’s talk about ideas to stay hydrated and keep cool.

You can ask for a FREE cup of water at dining locations where you order at a window.  They give you a cup of ice water as shown below. Ask for as many as you want. You could even just ask for ask to add to your water bottle. 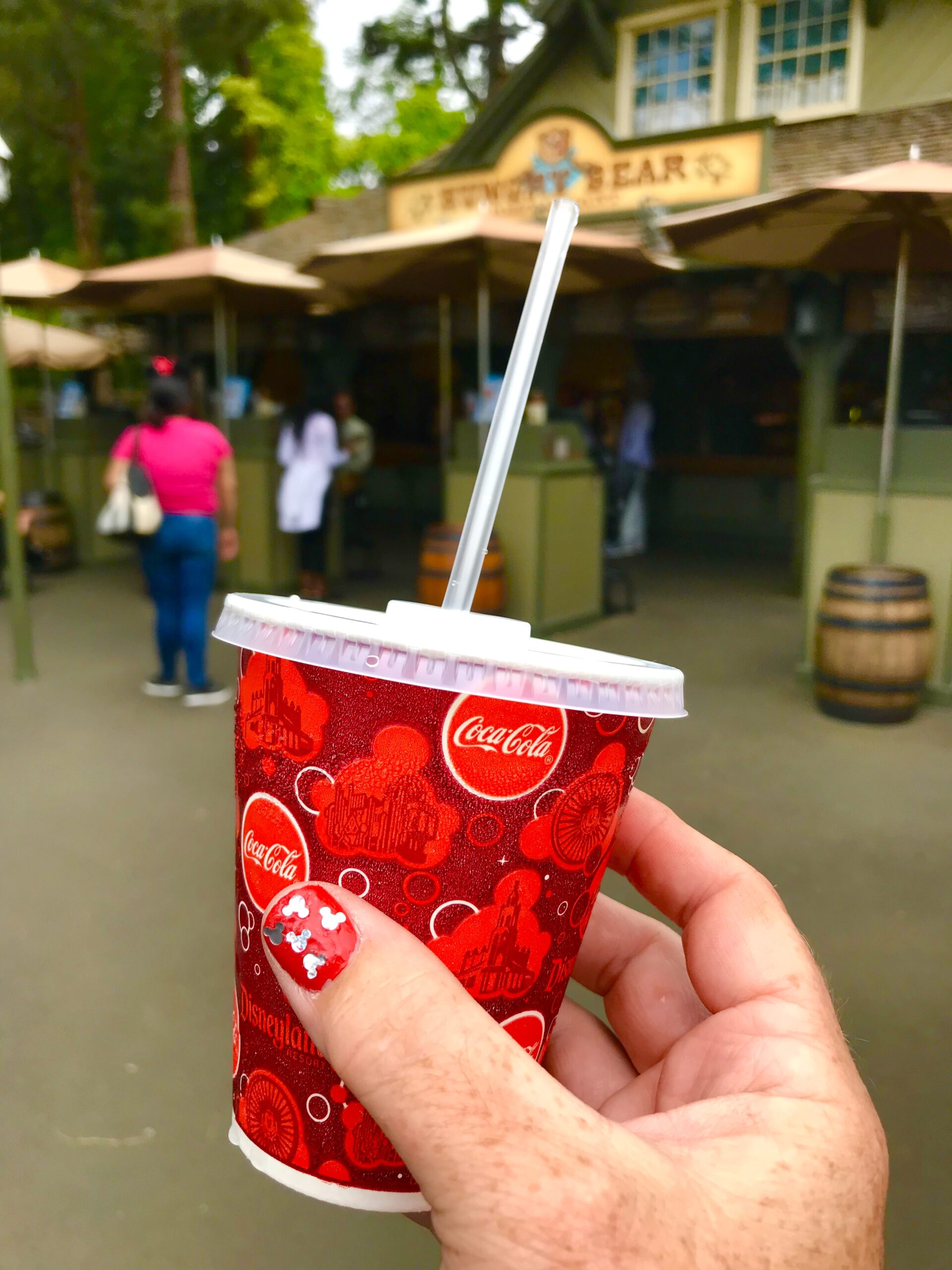 You can bring in your own water bottles! I also like to freeze the plastic water bottles the night before. I fill them halfway, freeze and then add water the next morning. As the ice melts throughout the day you can refill and have COLD water. 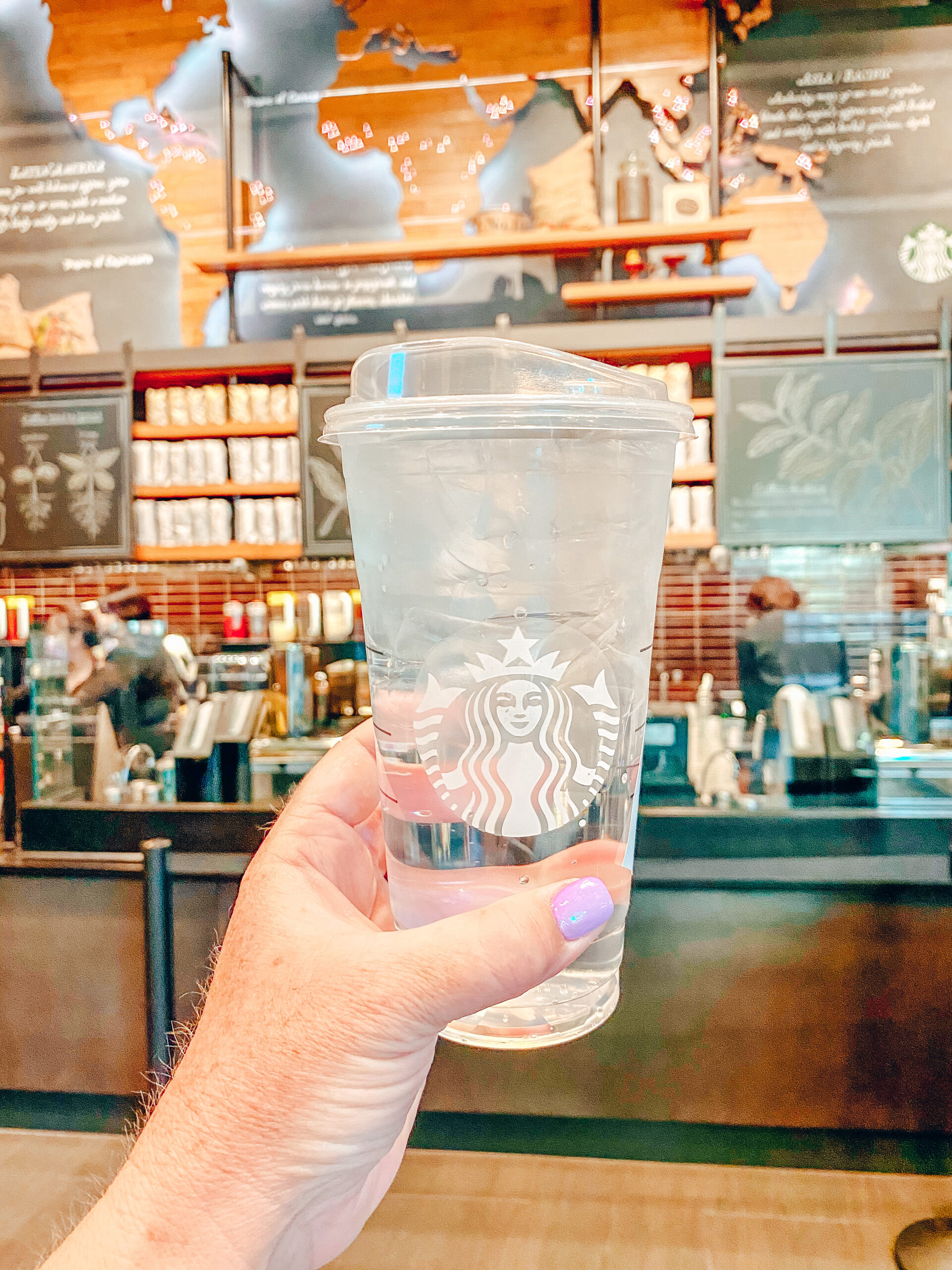 You can also refill water bottles at several water fountains throughout the parks. There are even a few attractions that have drinking fountains in the queues like Pirates, Space Mountain and Goofy’s Sky School. 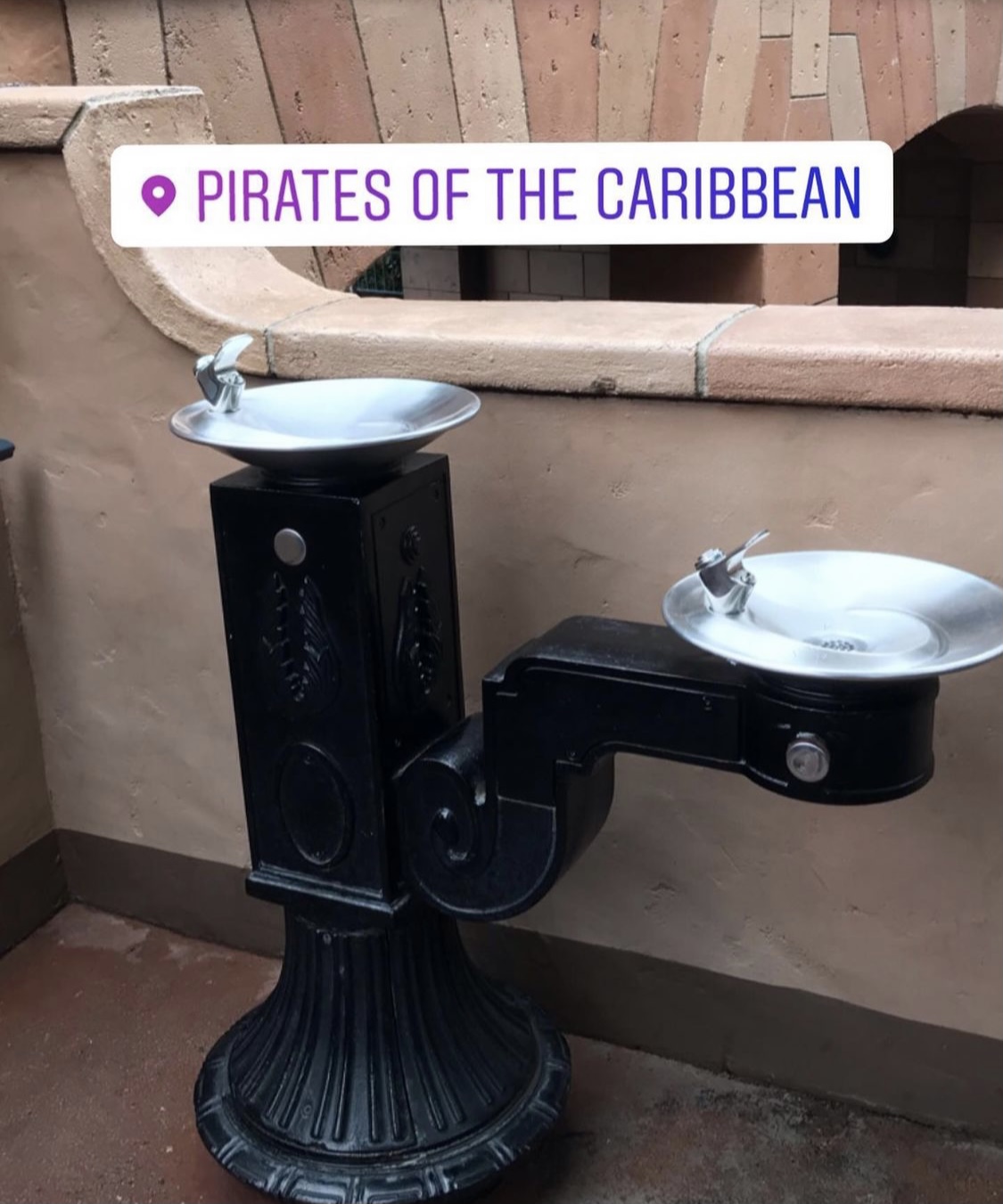 These are ways to stay hydrated.  If you’re looking for other tips to beat the heat I’d recommend reading these posts things to do indoors and places to eat indoors.

And now the BEST thing to come to the parks are all the water bottle refill stations.  These allow you to refill your tall water bottles easily.  I’ve compiled a list of all the locations I know and added photos to help!  And you don’t want to miss the last option, cold filtered water!

1 – Red Rose Tavern in Fantasyland – the refill station is located inside the front door and to the right.  Walk in like you’re going to order and take a hard right.  It’s over in the corner. 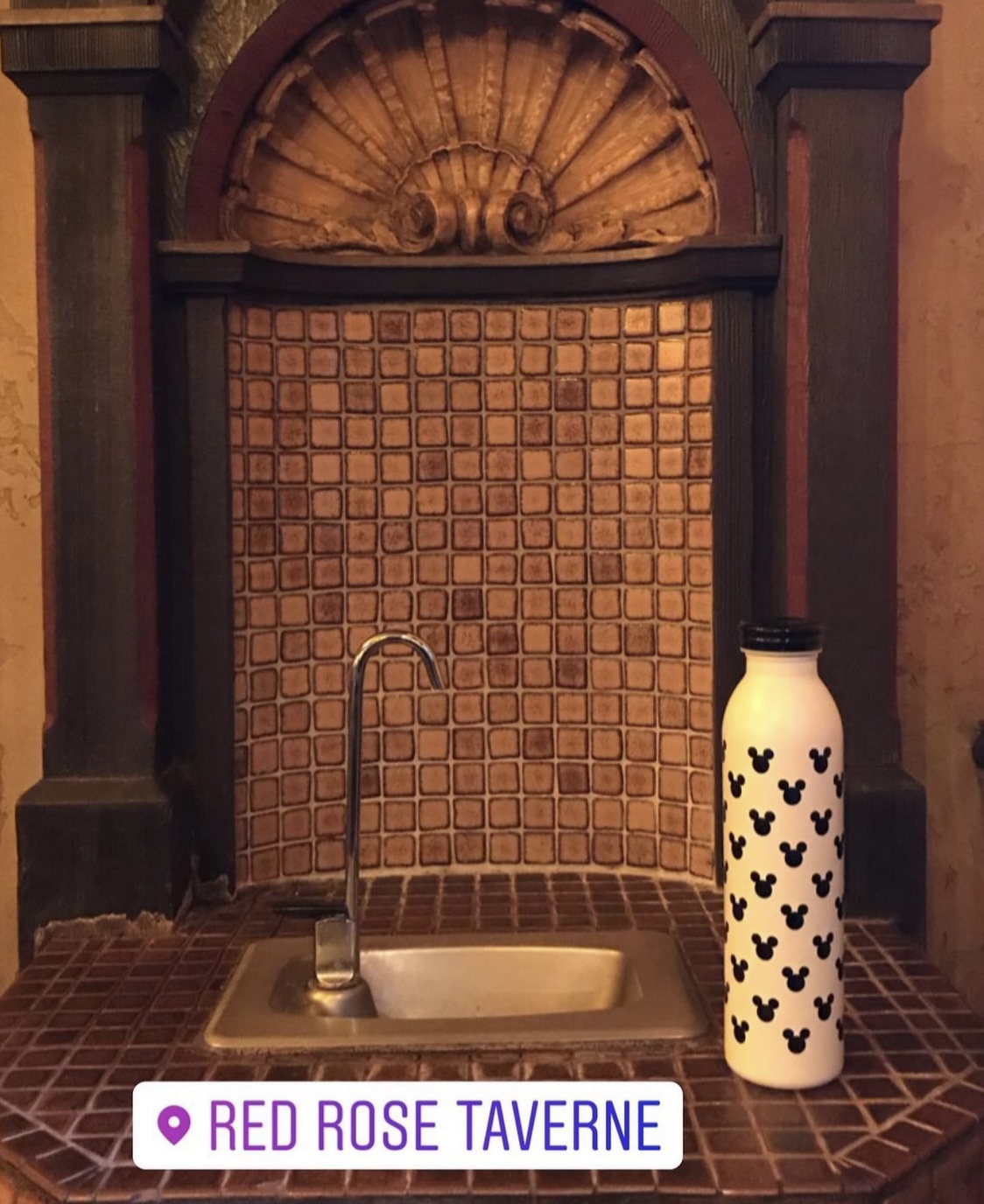 2 – Galactic Grill in Tomorrowland – the refill station is located to the left of the food ordering windows. 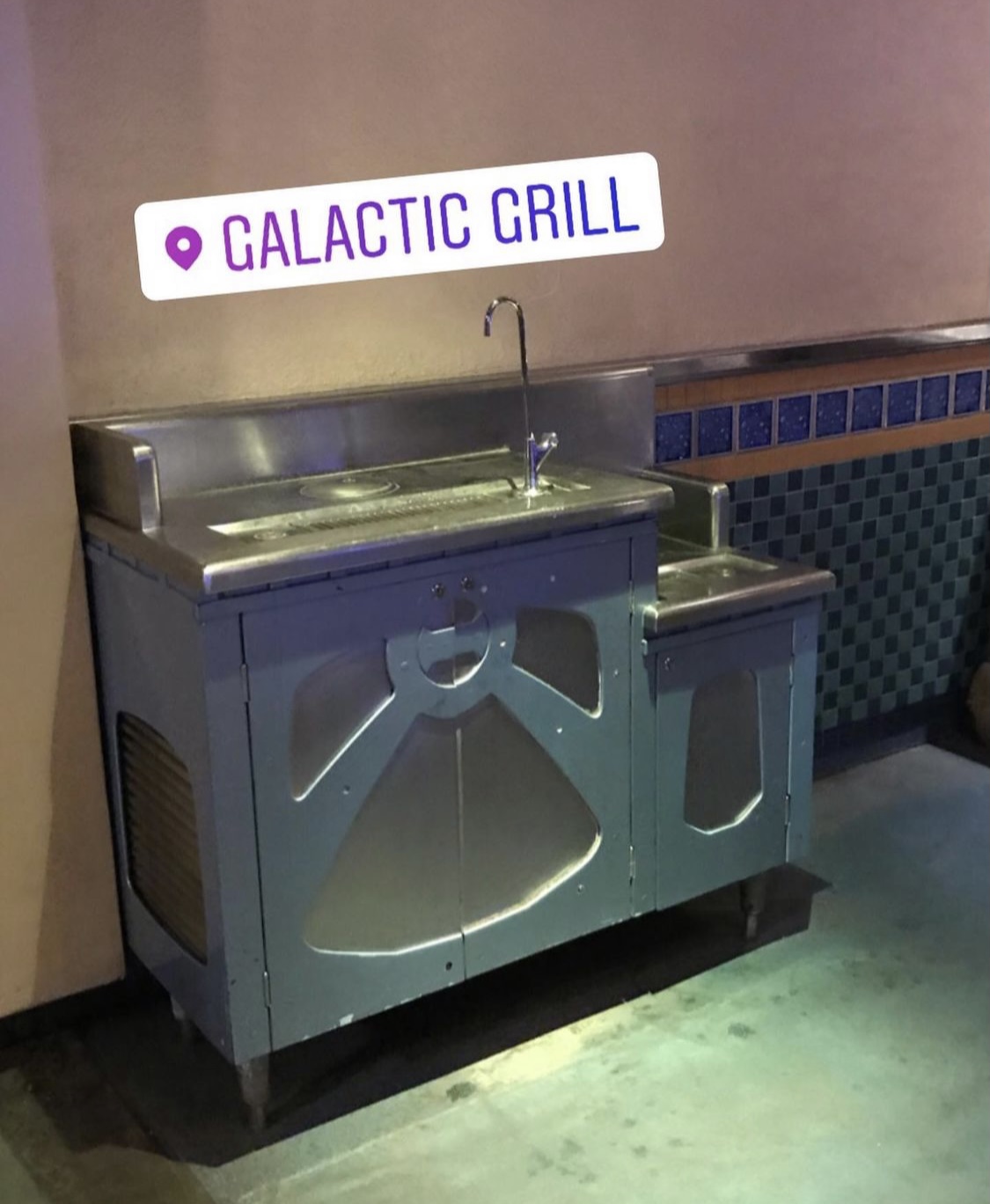 3 – Autopia in Tomorrowland as you exit the attraction there’s a refill station. 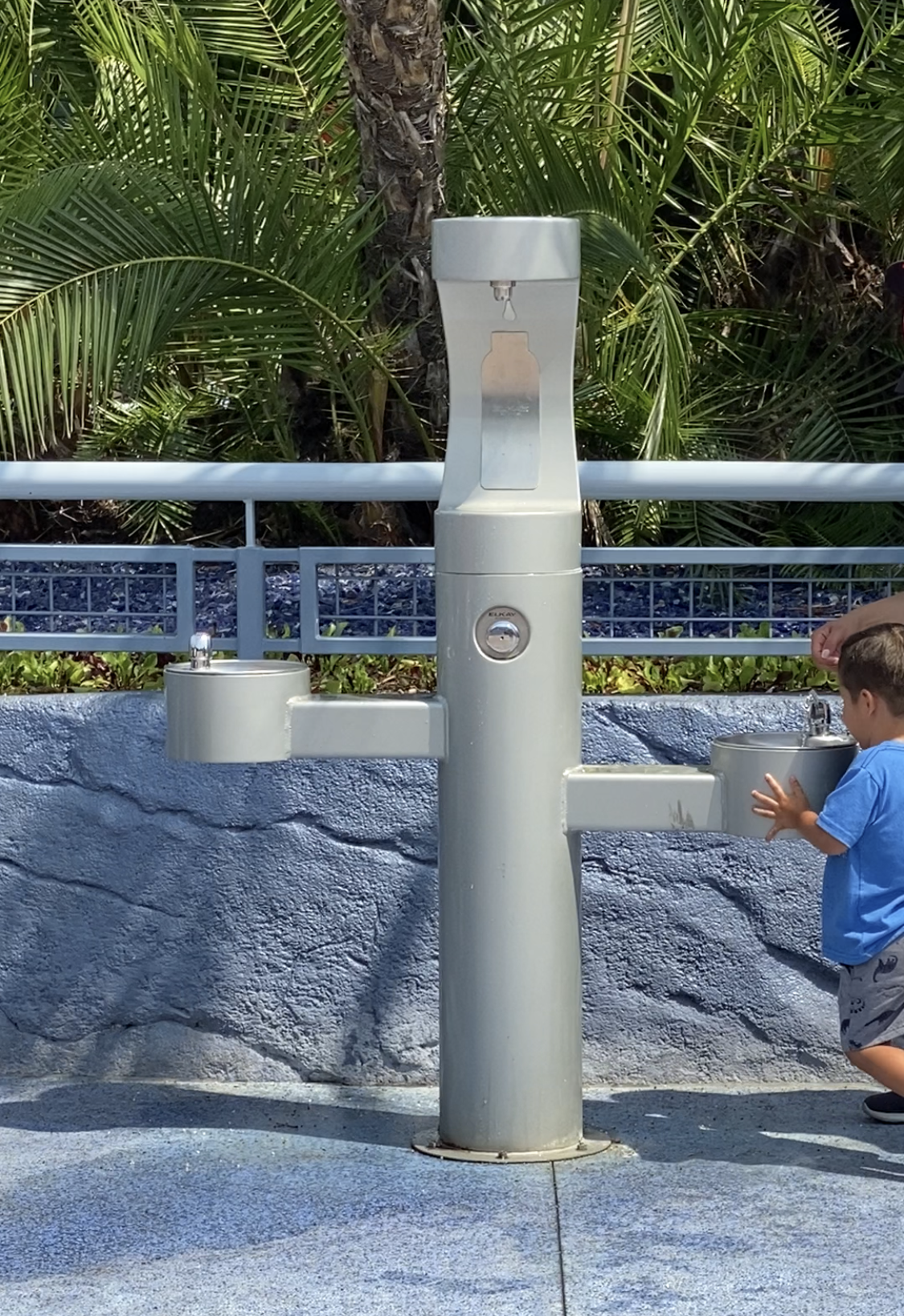 4 – Next to Pioneer Mercantile in the walkway between Frontierland and Adventureland. 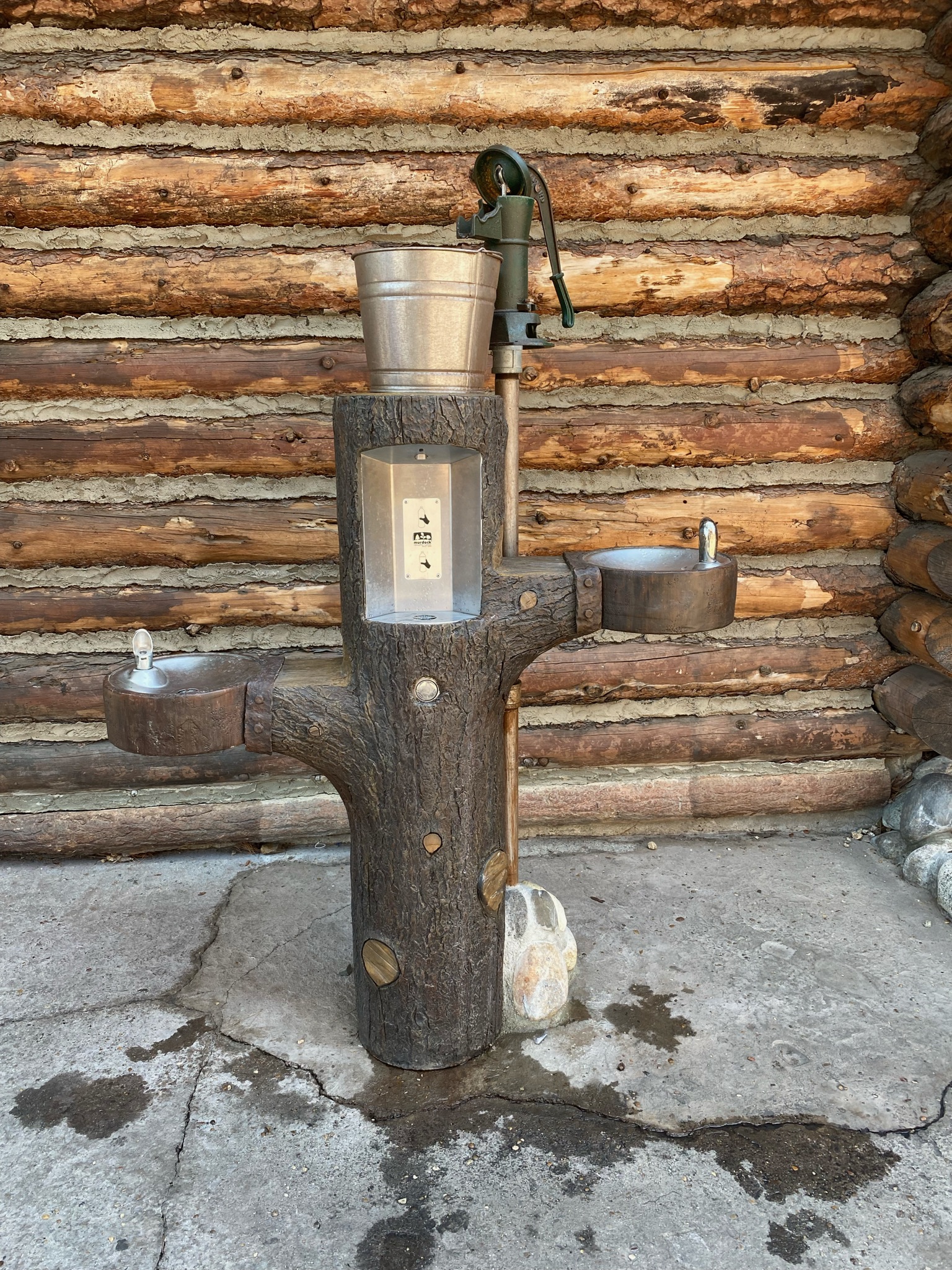 5 – Pirates Lair on Tom Sawyer’s Island there’s a water bottle refill station over on the east side of the island around by the restrooms. 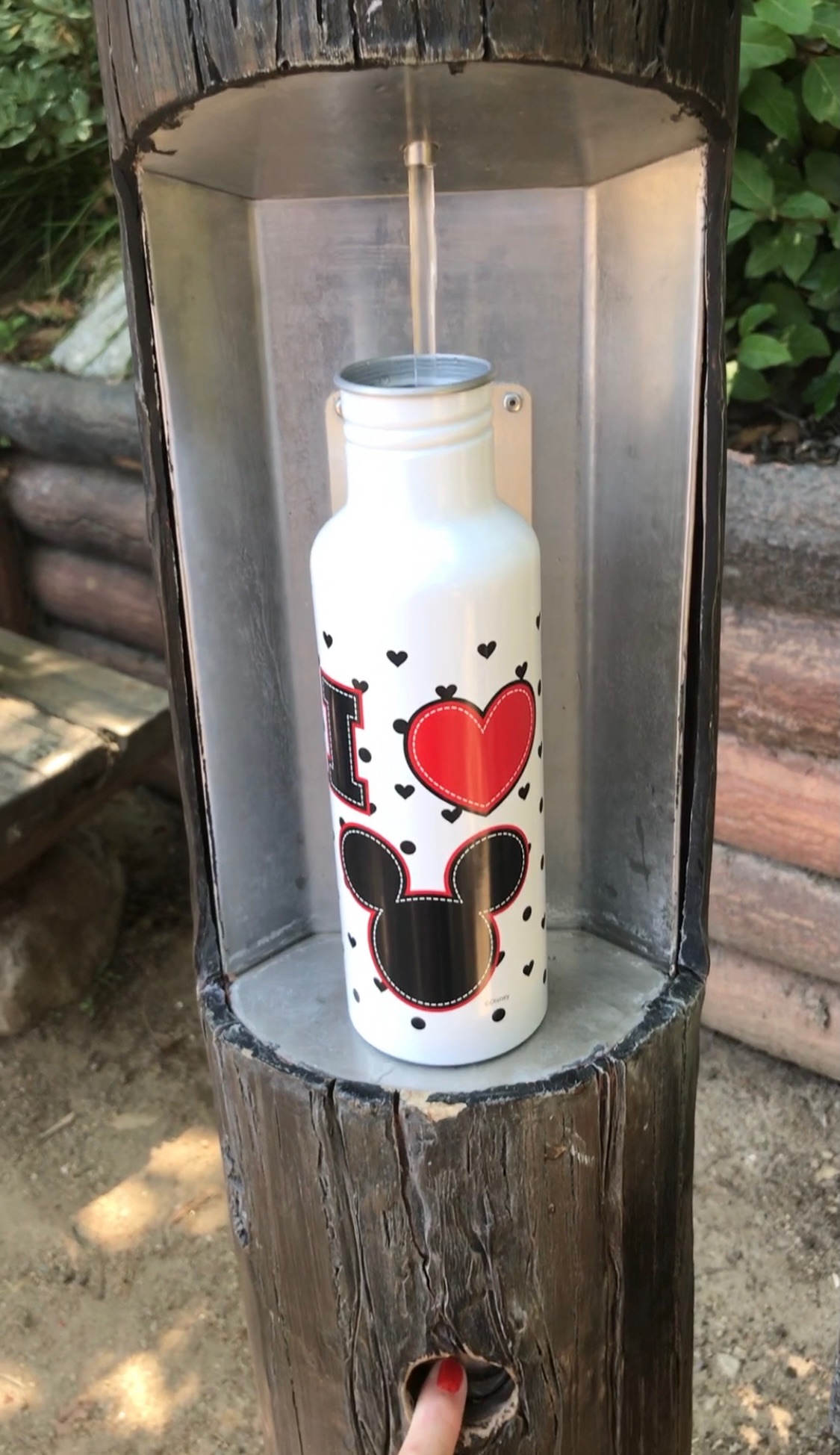 6 – Rancho Del Zocalo in Frontierland is a restaurant and has outdoor seating.  Kind of in the middle of the seating there is a water bottle refill station. 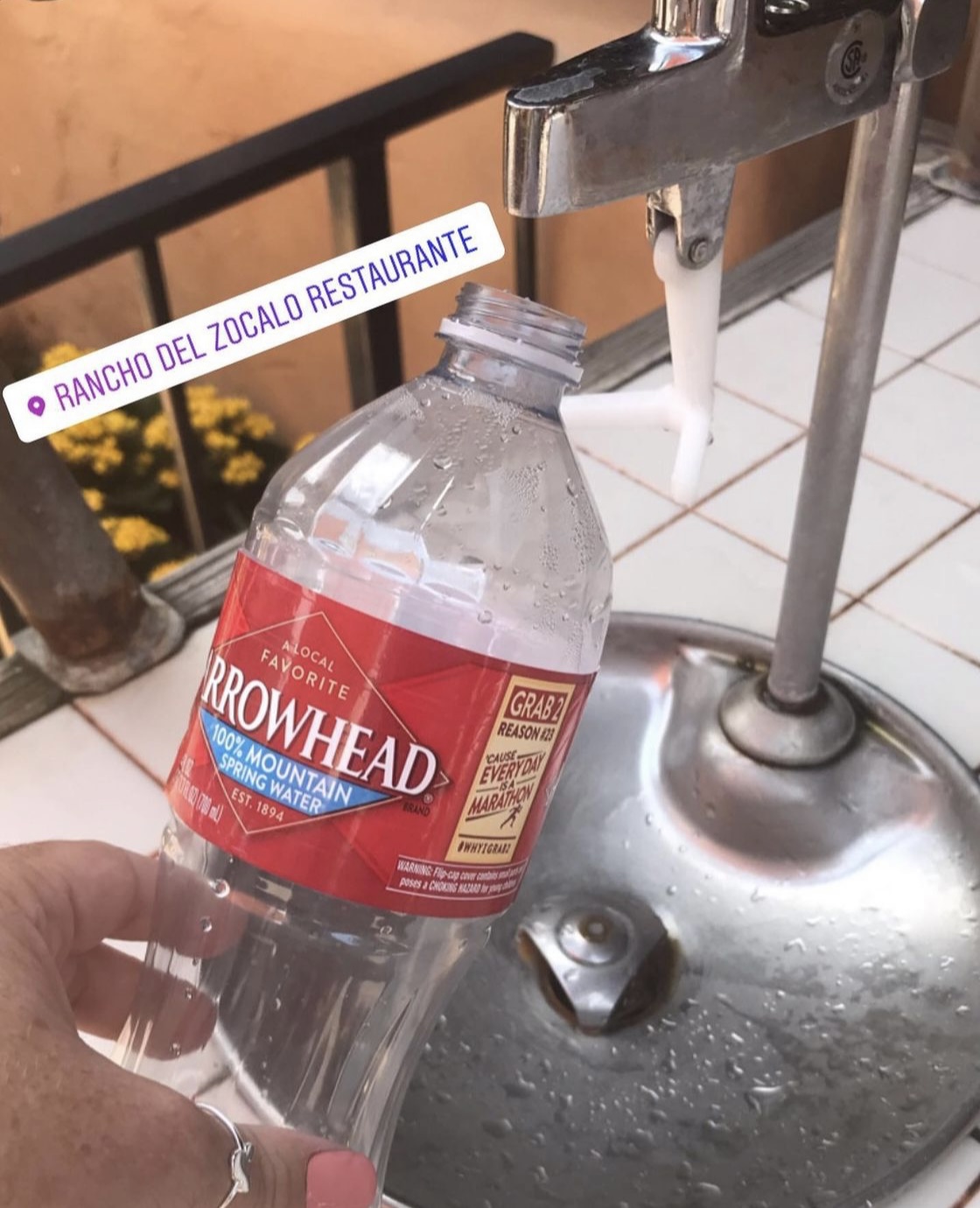 7 – Star Wars: Galaxy’s Edge inside there are 3 water bottle refill station.  One at the exit of the Millennium Falcon ride and one near both restrooms. 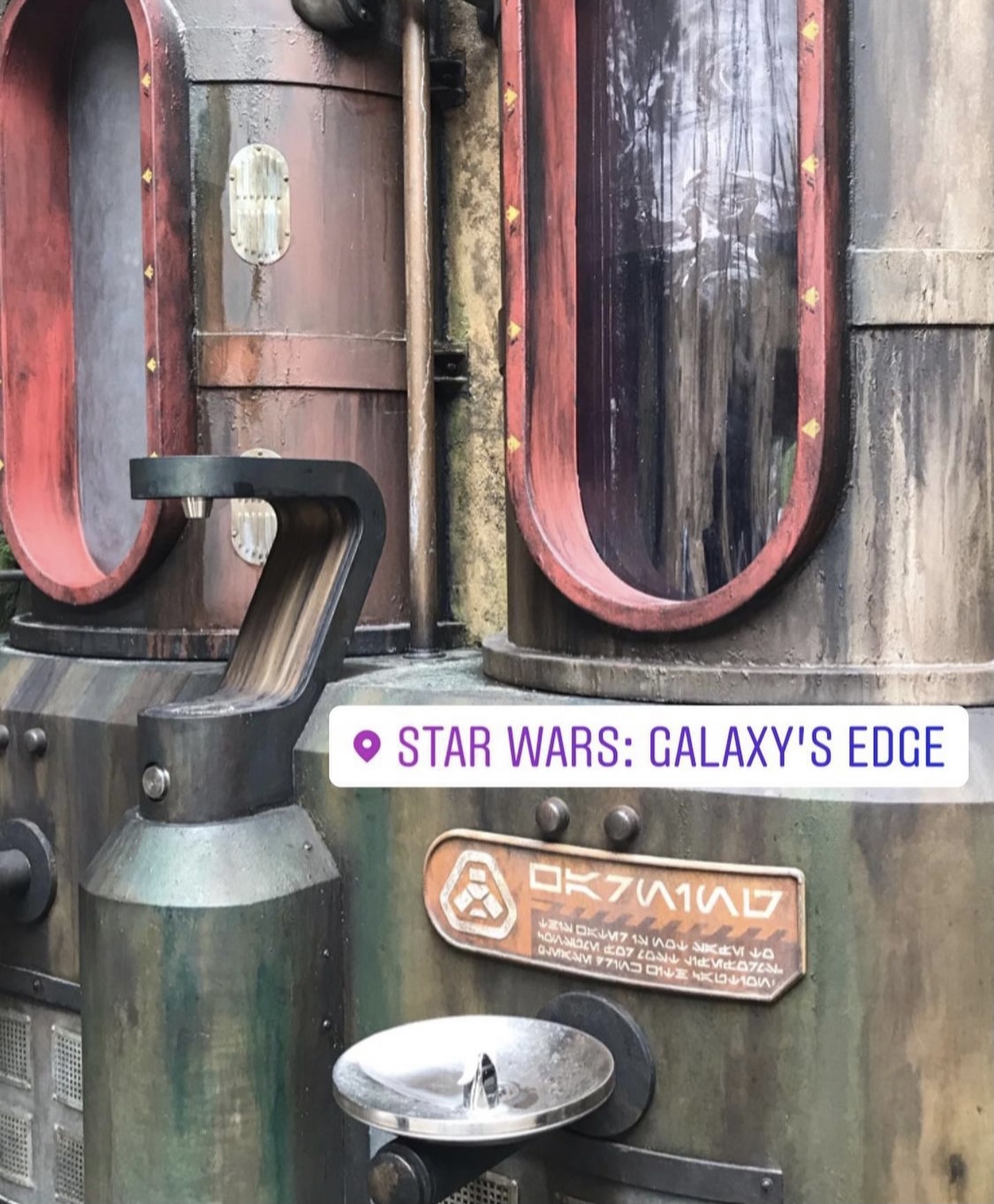 8 – Now for the best kept secret water refill/drinking fountain!  This one is found inside the Baby Care Center at the end of Main Street in Disneyland.  Anyone can go inside and use this water fountain with COLD filtered water.  I asked the cast member who could come inside and use it and she said ANYONE! 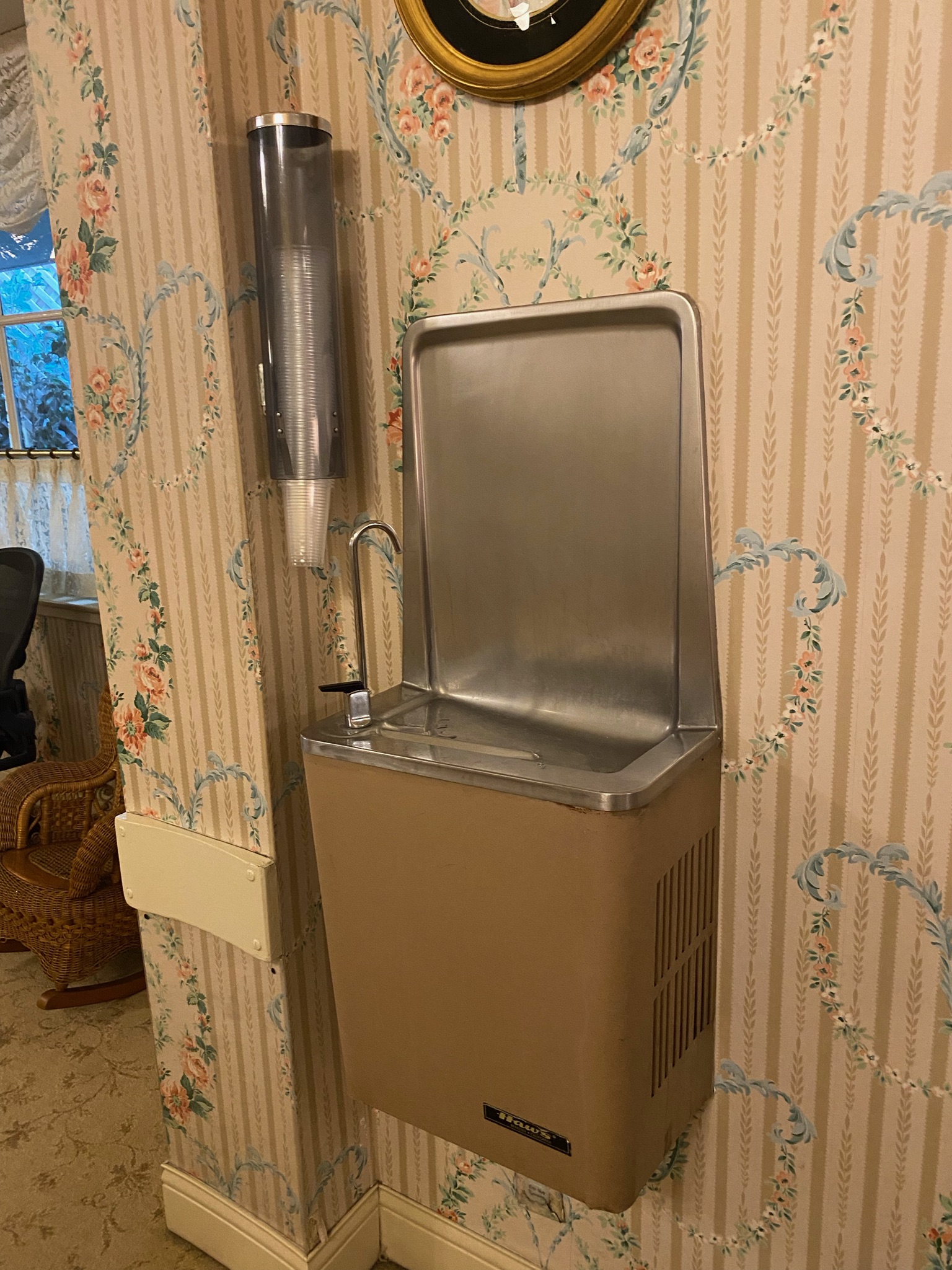 Now water refill stations in Disney California Adventure are few and far between.  You will find many water fountains spread throughout the park. 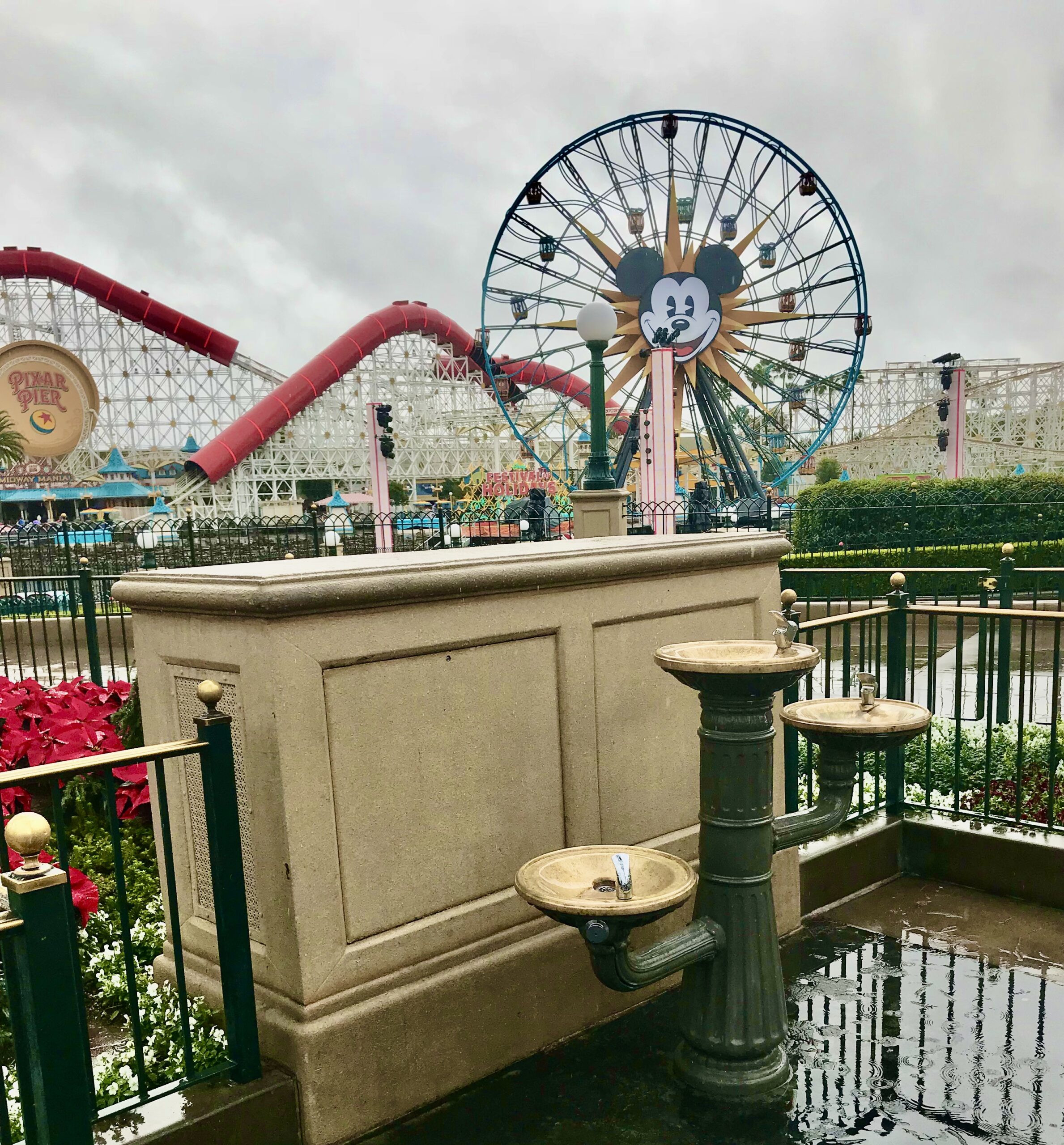 9 – But there is only one water refill station over in the new land, Avengers Campus. The one refill station is located next to the archway entrance of the Ancient Sanctum. 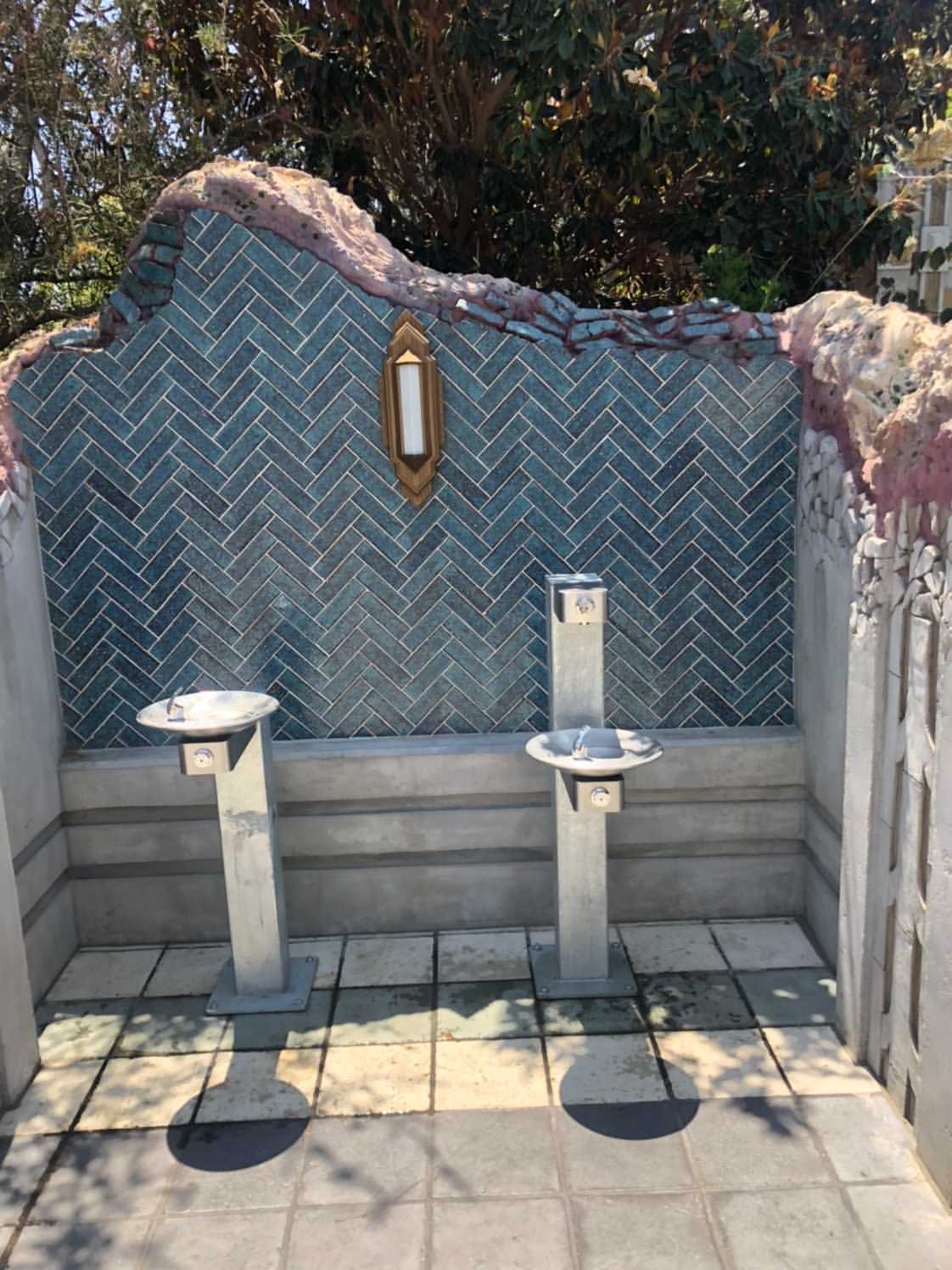 10 – But I have another tip for you inside Avengers Campus.  Inside Pym’s Test Kitchen there is one of those Coca-Cola Freestyle refill soda machines.  I used the COLD water to refill my water bottle. 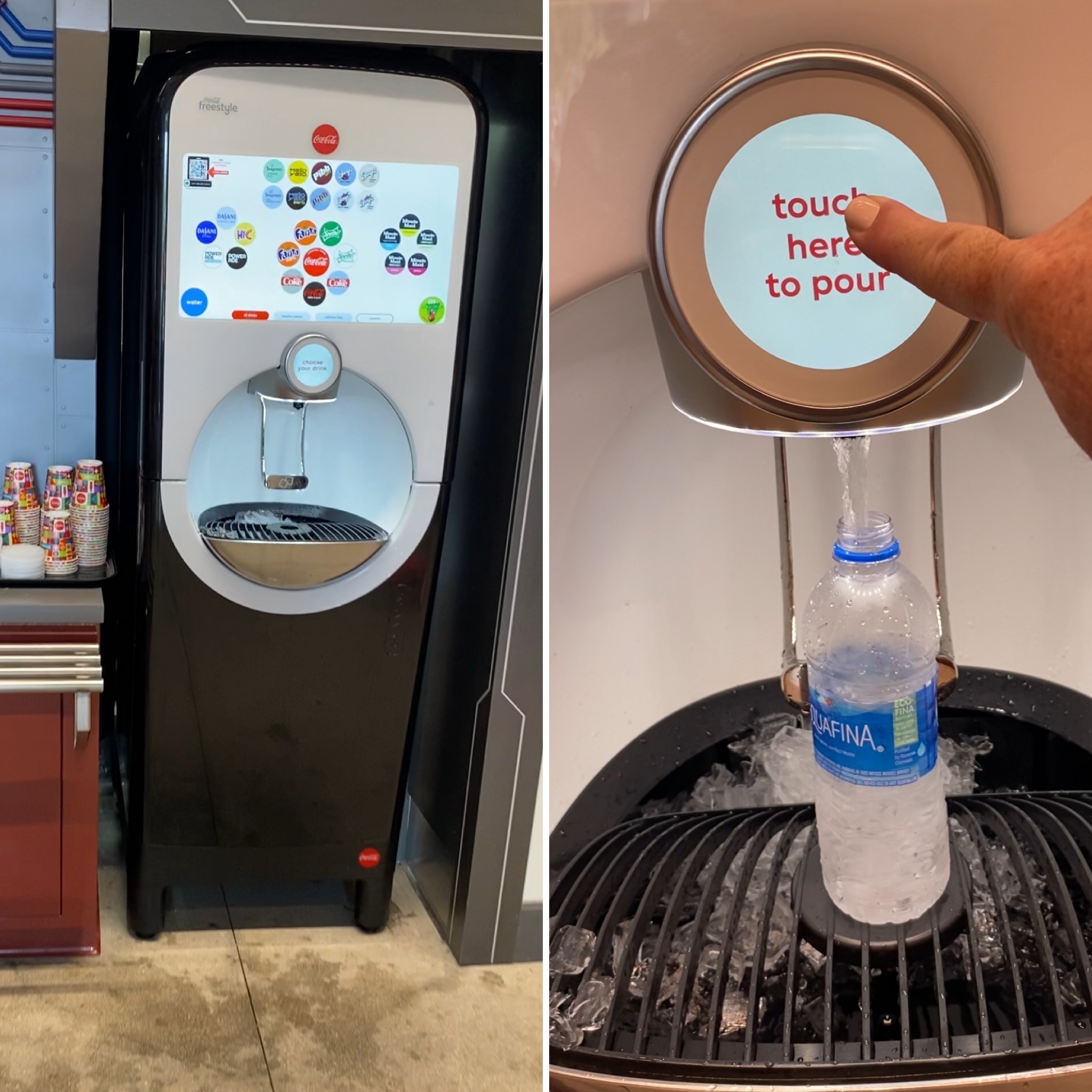 11 – Across from Soarin’ Around the World next to Humphrey’s is another Coca-Cola Freestyle refill soda machine.  You can get a cup here and fill it with water and ice to put into your own container or use the cup if you don’t have your own water bottle.  This spot is kind of hidden and not many people know about it.  It’s tucked away under this sign. 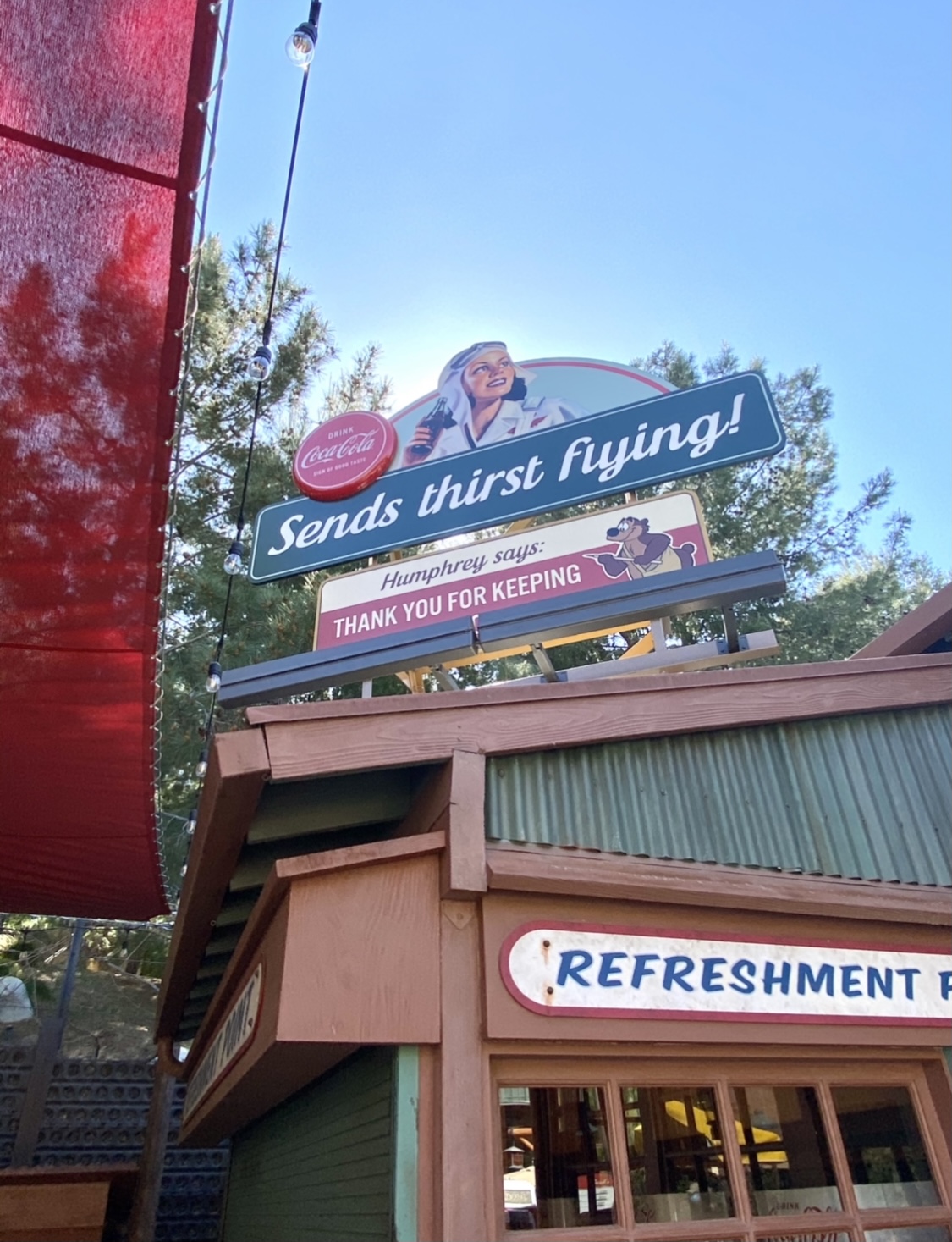 Those are all the locations in both parks.  As new ones pop up I will add to this post.  I will also let you know if any are removed like the one by the Mint Julep in Disneyland.  So keep this post bookmarked for easy reference before your next visit.

We all know that Goofy is a fun loving character.  So his water fountain over in Toon Town should be no different.  For a fun playful interaction go fill up your water bottle at the drinking fountain labeled Goofy’s Water.  When you press the button to get water you’ll hear different sounds come from the water fountain.  Press it several times for some laughs.  And for more fun stuff to do in Toon Town check out this post. 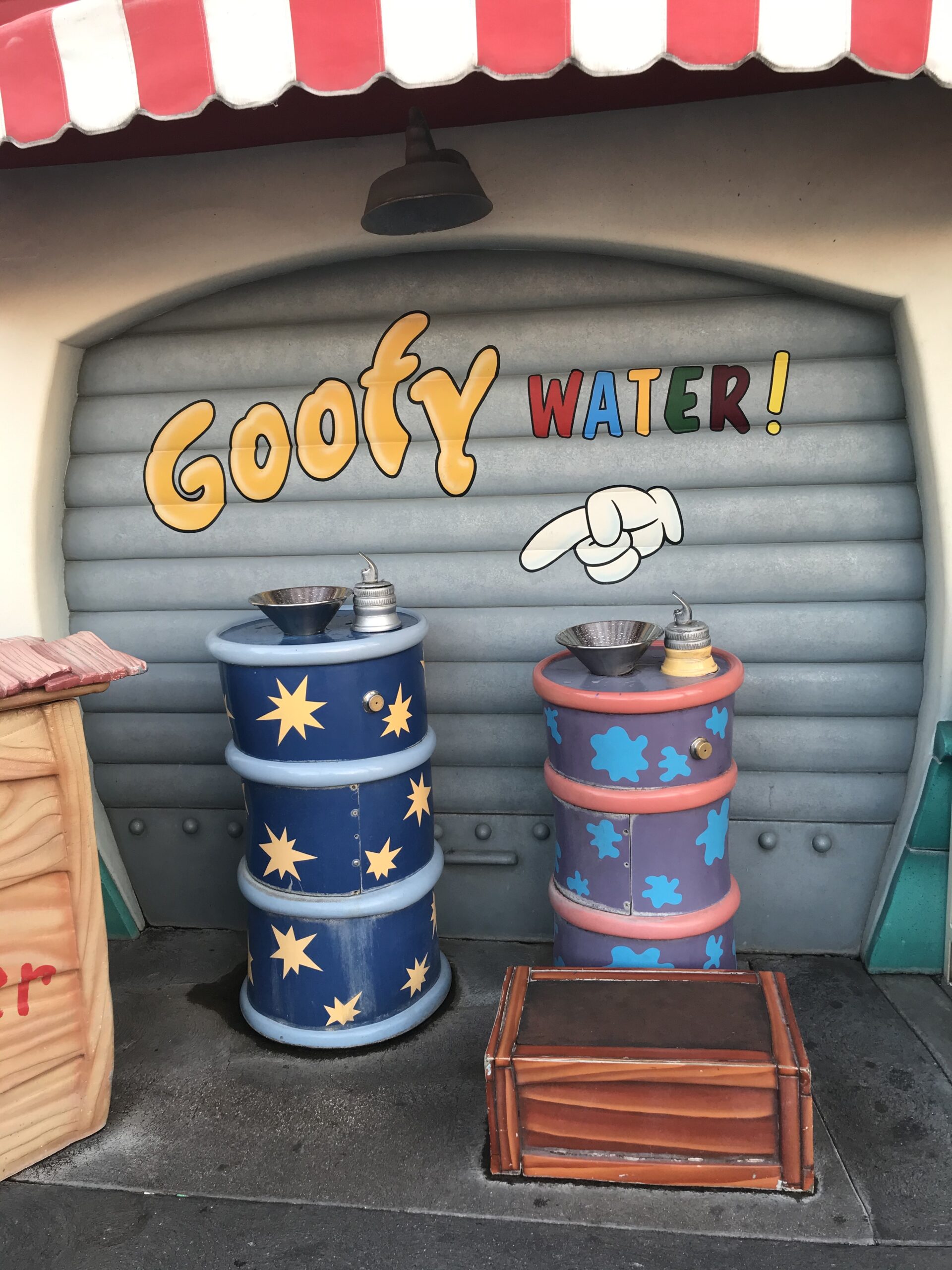 Lastly if you can’t find any of these refill stations ask a cast member for help.  Make sure to stay hydrated especially on hot summer days!

Be sure to pin this to your Disney planning board. 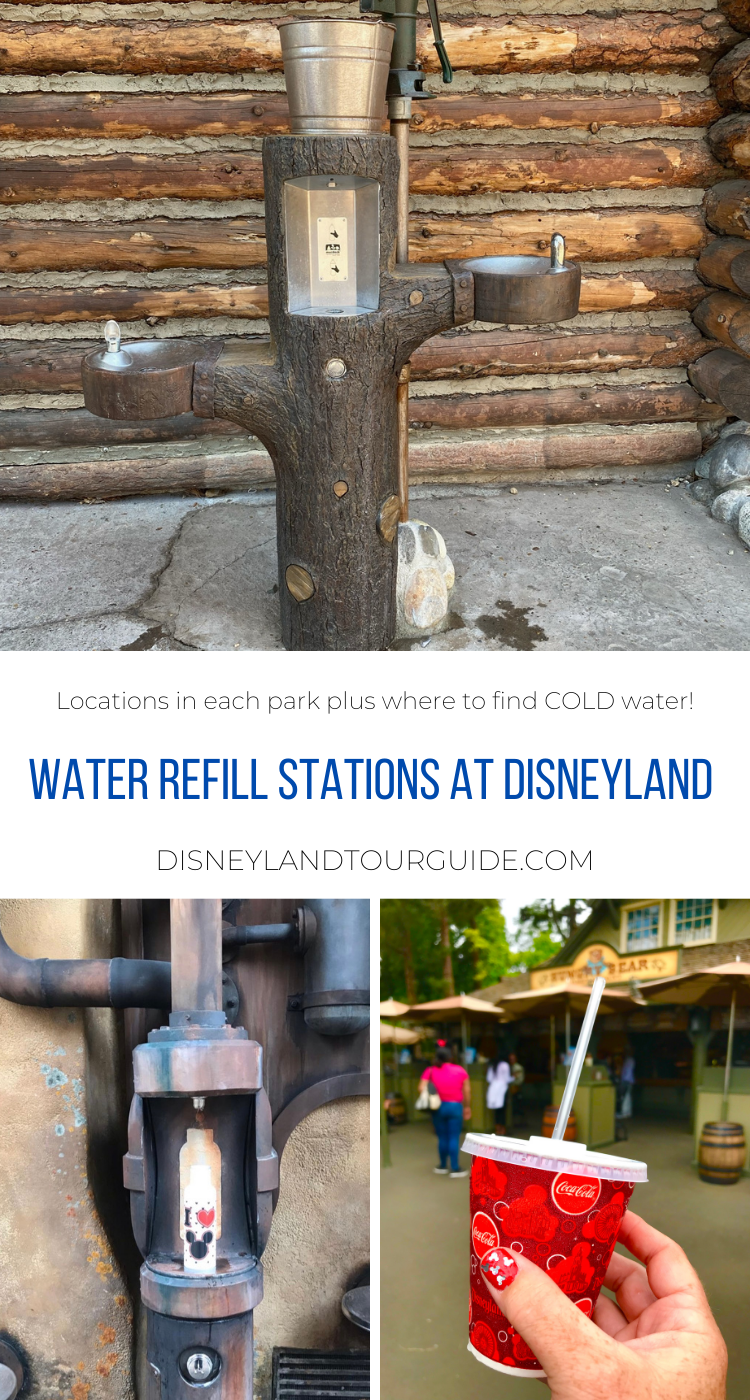 Best tips for FIREWORKS and projections at Disneyland

Here’s everything you need to know about watching fireworks and projections at Disneyland including when, locations, best views and more....

A complete guide for the Oogie Boogie Bash, a separate Halloween ticket, after park-hours event located inside Disney California Adventure. ...

It’s time to say goodbye to FASTPASS, FastPass+ and MaxPass at WDW and Disneyland.  Disney Genie a new digital tool...

Halloween Time at Disneyland Sept 3 - Oct 31, 2021!  The return of the Oogie Boogie Bash, Halloween Screams plus...

Hello and welcome to my page where I share tips, information, strategies, news, events and more mainly about the Disneyland Resort. Growing up my grandparents owned a travel agency. I watched my grandmother plan and lead tours all over the world. Between her and my mother, I learned the importance of planning before you go on a trip to make the most out of your time. While my main focus is Disneyland you’ll find info about other Disney parks and Disney cruises too!
If you’re overwhelmed or need help planning your trip I offer customized touring plans.

Explore Anaheim during Halloween season there’s so much to see and do!

Best tips for FIREWORKS and projections at Disneyland